How do you deal with difficulties and challenges these days?

What’s stopping you? What can contribute to your success?

Get insights, food for thought and empowerment from the Hebrew letters.

Pick one card and get the message from the Twenty-Two Gifts cards: 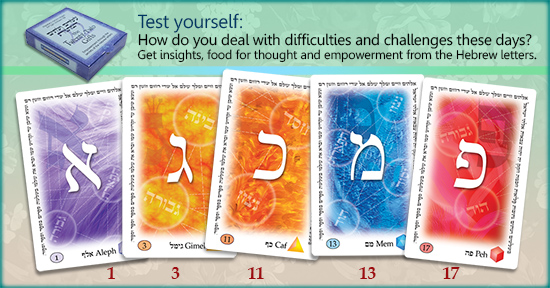 Find your message at the bottom of this article.

When you select a Hebrew letter from the five cards shown, you will get important insights about your current situation.

The choice of a certain Hebrew letter is never coincidental.

By choosing one "random" card that carries a Hebrew letter, you can learn a great deal about your situation, your approach to solving challenges, your conduct, and what may block you from fulfilling your ambitions.

The Hebrew letters contain a great deal of knowledge.

Each of the letters bears its own unique frequency.

Through the wisdom of the Hebrew letters you can learn a lot about yourself and your attitude to life.

Each letter conveys qualities that can empower you and empower hidden aspects of your personality.

The positive and empowering attributes of each letter - can also point to the opposite sides - our shortcomings and weaknesses.

To utilize the power that your chosen letter gives you, keep it in your consciousness for a few days.

According to the Kabbalah, the Hebrew letters played a major part in the creation of the universe and everything it contains.
Each letter has its own empowering, healing and constructive characteristics.

We can utilize the empowering attributes of the letters in everyday life, to reinforce and direct us.
Each letter will teach you what mental and emotional powers you need to recruit in order to solve a problem or challenge you are facing.

The cards presented here were chosen from “The Twenty-Two Gifts” cards. 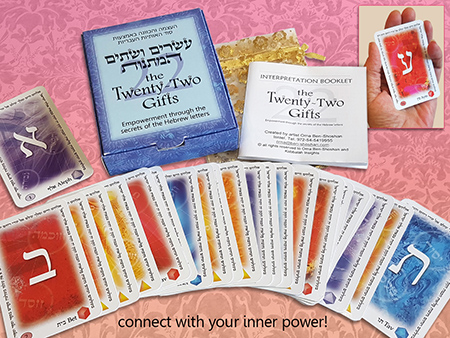 This charming set of cards will provide you with valuable tools to empower and guide you as you cope with life's journey. They will connect you to your own inner power and help you activate it.
The 22color coded cards are based on the secrets of the Hebrew alphabet.
Use them whenever you need a mental boost or a guiding hand, or as a spiritual gift to open your day.
Get your own set here .

Not just a cute little set of cards ...
By drawing a "random" card from the set, which depicts a certain Hebrew letter, you can learn a lot about your situation, the way you approach challenges, attitudes, your pattern of action, and what may block you from fulfilling your aspirations.
When you accept the powerful attributes of your chosen letter, take into account that the filling comes to complete a certain deficiency.
- Drawing a particular letter from the deck is never coincidental.
The "positive" = the empowering qualities of each letter - can also point to the "negative" = its opposite side - our shortcomings’ deficiencies and weaknesses.

The expansion document provides you with all the hidden knowledge that is transmitted by each chosen letter.
It lists the points of thought, deficiencies and weaknesses that this letter fulfills in your current situation.
Included in the cards set.

Here are the insights of your chosen letter:

The letter Aleph supports people who are facing new beginnings in their lives, especially if the new path was initiated by themselves, and is unusual or groundbreaking.

- Fatigue and a sense of disgust with the existing situation and a desire to embark on a new path, to initiate and change.

- It is possible that your adherence to conventional lifestyle and attachments to fixed frameworks that dictate you how to conduct yourself empty you of energies.

- Do you only act on the expectations of others? Trailing others?

- Do you lack the courage to go your own unique way if it is unacceptable to the people closest to you?

- Do you let emotions take control of your decision-making, ignoring the ways of logic?

The letter Gimel stabilizes those who are childishly impulsive, restless, spend their money irresponsibly, or develop dependency on the sources that support and nurture them.

- Do you practice mental immaturity? Allow selfishness, impulsive desires or arrogance to drive you? Give up your conscience and moral principles and do not take into account the consequences of your actions?

- Do you forget to return a favor under a favor?

- Are you having trouble rejecting immediate gratification?

- The letter Gimel is also beneficial to people who have lost their joie de vivre and treat every matter with great gravity and seriousness.

The letter Caf helps those who act from a place of weakness and low self-confidence, or feel they have lost control over their fate.

- You may have ideas or ambitions and you do not have the power to realize them, or you are unwilling to invest the effort required.

- Sometimes the letter Caf indicates the desire to always be in control, that originate in lack of faith in life, or inability to contain and accept reality.

- Lack of desire to cope and understand the difficulties and pain involved in a particular task, and a tendency to give up instead of fighting for something that is important to you.

- Sometimes the letter Caf also points to an inappropriate forcefulness (due to lack of self-confidence and feeling inferiority), to the pursuit of respect, when you have nothing to offer in return, or the intention to succeed and profit at the expense of others.

The letter Mem will make it easier for you to flow with the circumstances, especially in cases where you refuse changes and act rigidly.

- For those who are not in touch with their emotions and approach life by cool logic only, the letter Mem reminds you that your connection to the world and to people will be stronger and more tangible through emotion.

- The letter directs you to avoid confrontations that might put you at risk, to be flexible, and to find alternative ways to attain your ambitions.

- For those who cannot delay immediate gratification and fight to achieve their desires here and now, it is recommend to practice restraint, not to waste energy on conflicts and struggles, to act discreetly, efficiently, below the surface, in order to avoid objections along the way. Your ambitions will come true over time if you are patient and willing to sacrifice yourself for the cause.

The letter Peh balances situations of reckless speech, or, alternatively, cases where you do not say what needs to be said, which may put you at risk. Peh teaches you that you should focus your mind and learn things in depth instead of scattering yourself over many areas.

- Peh implies situations in which you are in a blocked or limiting state, or you cannot express yourself creatively, stuck in your place without being able to progress, or feeling withered and extorted.

- Is your persuasion skill limited due to difficulty in using the right words? Poor language?

- The letter Peh recommends that you learn new languages ​​or develop new creative ways of expression to open yourself to the world.

- If you are suffering from deteriorating health, Peh suggests that a solution will be found to cure the disease. 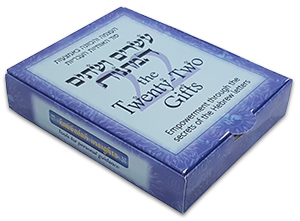