This article is about reincarnation.

How much energy did your soul bring with it to this lifetime?
Has it descended into this reincarnation with its full potential?

We originate in the spiritual worlds, where the souls are created as a spark of the Divine light of Creation.
Every soul has a mission, a purpose, certain experiences and lessons to learn in order to complete its development and growth.

The lessons and rectification that a certain soul is supposed to undergo depend on its essence, and according to Kabbalah, it is the source from which it was carves in the upper worlds.
If so, each soul undergoes a process of many incarnations along the centuries, and in every incarnation, it learns and fulfills certain issues and ascends spiritually.

According to various resources, we learn that not all parts of the soul are reincarnated in every life time.

Is the soul divisible?
It turns out that yes - the soul is an energetic entity with its own uniqueness and consists of different elements.
The famous Dr. Michael Newton regressed many of his patients into previous lifetimes, and according to a number of cases he investigated, he found out that only a certain percentage of the soul's energy descends to each reincarnation. The remaining part of the soul stays in the spiritual worlds in a dormant state until the other part completes its incarnation, returns to the spiritual world, and reunites.
Some souls reincarnate with 40% of their energy, and others may descend here with 70%.

What is the reason for this, according to Kabbalistic wisdom?
Kabbalah deals extensively with reincarnation.
According to the Book of Incarnation of the Holy Ari, there are parts in the soul of a person which have already achieved full rectification, and therefore they do not need to return into a new life time, lest they spoil and ruin what has already been corrected.
The parts of the soul that return here to live in a new body are the parts that have not yet been rectified. 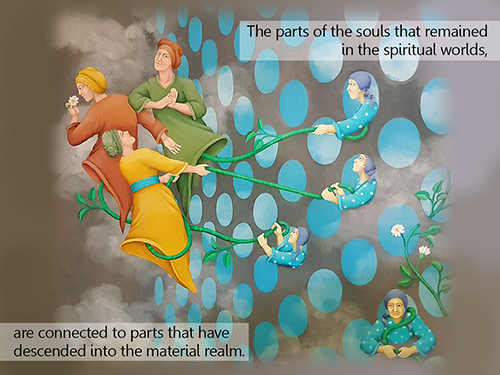 The reincarnation process is a long course in which the soul returns time and again to undergo various experiences in the material world, to learn and to unveil its true potential, so that eventually it can complete all the lessons that are intended for it and then, reunite and merge with the source that created it.