Who is the strange horned figure on this seal?

Here is one of the King Solomon seals, named "The First Pentacle of the Sun".
On this seal - a radiant figure with horns is drawn. Alongside the figure are the Hebrew words "El Shadai" (אל שד"י) (One of the holy names of God).

Who is this divine figure? 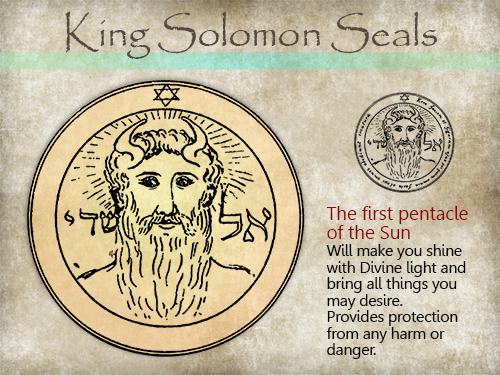 This is the archangel Metatron, the Minister of the Interior, who is the emissary and representative of God that instructs human beings from the upper worlds.
According to various Kabbalistic sources, Metatron is said to be the most senior angel in the world of creation (Olam Yetzirah) - the realm where angels are created.

In the “book of Heichalot” we can find comprehensive knowledge of the angel Metatron and how he received the highest role in the armies of angels:
Hanoch ben Yered was a human being, flesh and blood, a righteous and God-fearing man, who lived in the generation of the great flood (the seventh in the lineage after the first man). He was taken by the Creator and ascended miraculously (without actually dying) to the upper worlds:
" Enoch walked faithfully with God; then he was no more, for God took him" [Genesis 5]

This is what Rabbi Yishmael had said about him:
"Metatron, the angel of the interior, said to me: 'When the Creator took me from the generation of the flood, it enveloped me in the wings of the Spirit of the Shekhina, to the upper firmament ... and nominated me to serve the throne of glory every day.”

In the supreme process of coronation, Enoch (Hanoch) was granted many blessings from the Creator, his dimensions were magnified and intensified, and he received 72 wings (36 pairs of wings), 5360 eyes, “Each eye as the greatest light”.
A chair was built for him, reminiscent of the Creator's Throne of Glory, with all the lights of the world shining in it. The chair was placed at the entrance to the Seventh Divine hall and Hanoch was seated on it.

The Creator loved Hanoch most of all - he made him a garment that shone with all kinds of lights, dressed him in a coat of honor, and gave him a crown of kingship, in which there were 49 stones shining like the sunlight.
On the crown the Creator wrote in fire the Hebrew letters through which the world was created.
When this crown was tied to Metatron's head, all the ministering angels in front of the throne of glory moved away from him with dignity and fear.
"And they all fall upon their faces when they see me and cannot look at me from the glory and splendor of beauty”.

Metatron was given seventy names against the to the seventy languages of the world.
Some of these names may be familiar to you from various kabbalistic writings and talismans: זב"יה, צפצפ"יה, טפטפ"יה , etc. Every name conveys supreme lights.

The Zohar writes about Metatron that he controls all the angels responsible for this world, and has direct linkage with the Creator.
Metatron is also considered the redeeming angel to the world that protects mankind, and he is the one who summons blessings to the whole world, for he has received all the blessings of the Creator.

Why was Hanoch ben Yered chosen to play such an exalted role in the kingdom of heaven and earth?
In the Zohar it is explained that since Hanoch followed the path of truth when he lived in the physical world, he found the lights (sparks) that were lost by the first man because of the first sin (of the Tree of Knowledge).
This lights were hidden in the lower heaven, among the trees of the Garden of Eden, where they remained concealed until the birth of Hanoch.
Hanoch lived next to paradise, and the hidden light began to shine in him and so - he transcended spiritually.
Due to the spiritual radiance that emanated from him, he was allowed into the Garden of Eden, where he found the tree of life, smelled its fruits, absorbed its essence, and the spirit of the preliminary light of life entered into him.
Angels came from the upper worlds and taught him the supreme wisdom. He was given a book that was hidden in the Tree of Life, from which he learned and knew the ways of the Creator and the secrets of the universe. This is the reason why it was said about him “And Enoch walked with God”.

Hanoch lived in the material world for 365 years. He fulfilled the spiritual ascension that every man is supposed to aspire to, and then he was elevated to the upper worlds to his rightful place, and became the great and powerful Metatron the Minister of the Interior.
In practical Kabbalah, Metatron's name and its seventy different names are used for testaments and whispers, and many Kabbalists have warned against pronouncing these names aloud.

As for the First Pentacle of the Sun:
The original seal, on which the image of Metatron is engraved, there is a Latin sentence translated into English in this language:
"Behold His face and form by Whom all things were made, and Whom all creatures obey."
From this verse, we can understand that the purpose of the seal is to illuminate the face of the person who wishes to follow the path of the Creator (like Hanoch), a person who is in equilibrium with the Creator, who strives to give and influence the world.
The glow of his face radiates far away, deters the dark forces, and thus he is protected against tormentors and dangers..

When one invests effort, transcends and acts with high awareness, he is able to equalize with the Creator (whose essence is infinite giving), and therefore all his wishes and desires are fulfilled.
This is the secret of the seal: Protection and fulfillment of the wishes of the person holding it.The illustration of the seal can be utilized as an effective personal amulet that you can prepare for yourself.
- Download it to your computer and print it.- On the back side of the paper, write down your (first) name and mother’s (first) name. (This is the way you dedicate the amulet to yourself)- Roll the paper or fold it.- Keep it under your pillow, you can also make additional copies and spread them around the house in problematic areas.
You are welcome to order a personalized Kabbalistic amulet with the First Pentacle of the Sun – Here: 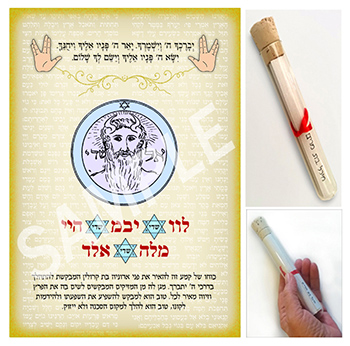 The Seals of Solomon - or "King Solomon Seals" are powerful symbols related to King Solomon.
According to the ancient traditions, these were the symbols engraved in his rings.
King Solomon seals are used in many Kabbalistic amulets and talismans.
Each seal has a particular purpose and influences a certain aspect of your life.

I prepared a poster containing the 44 seals of Solomon, all in one place.
This poster works as a "mega amulet" and when hung at home, the seals' magical energies will radiate all around and create miracles in your life. 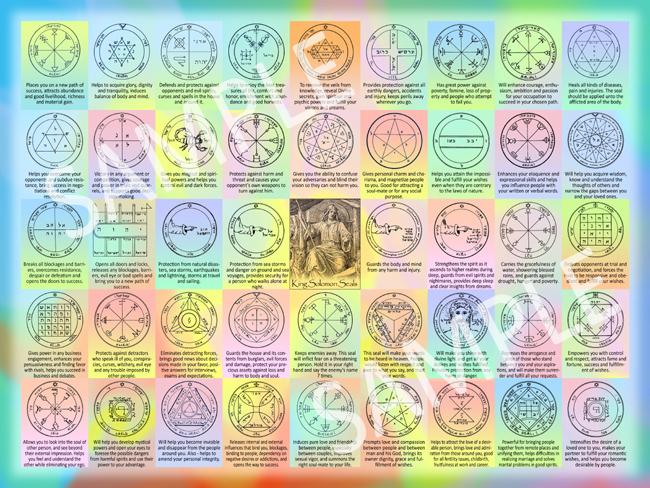 The 44 Seals of Solomon and their interpretations: